This story starts about a year or two before my birth in 1954. Dad was an Oklahoma-oilfield worker from Illinois by day, and roller-rink DJ & smooth skater by night.  Mom was the Okie soda-fountain girl at the Woolworth in town. Pretty sure that's where my obsession for chocolate malts started. :-)

My lovely wife tried her darnedest to groom me into a California Yuppie.  I resisted. That illusion had NO appeal to me. I was a mostly-Mississippi-raised redneck livin' in YuppieLand.

I have thoroughly enjoyed 2-wheeled toys since I was about 6 years old. I was lusting for motorcycles before girls. Well, until I turned 7 anyway.

People are way more different from each other that some of us will ever realize. Yeah we kinda look similar, but it's an illusion.

These are the ramblings of a geeky, endorphin-addicted redneck on the fringe of a modern society.

September 9, 2012.  Final packing and moving things around to where they fit took longer than I intended. I need more packing space and will have to look for more later...

Sunday morning was gorgeous. Sherry was off to church and I said good bye to the dogs. Marsh Creek Road & CA-4 had a little traffic as I headed into the Sierra foothills. At Copperopolis I turned right onto Obyrnes Ferry Road. Then CA-108 over Sonora Pass. 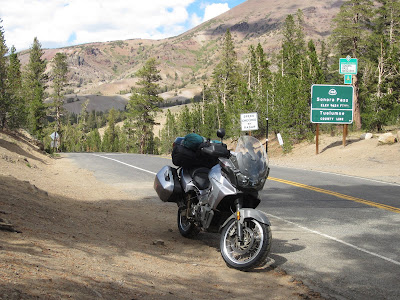 I stopped at the top of Sonora Pass for a break and to introduce a friend to another. 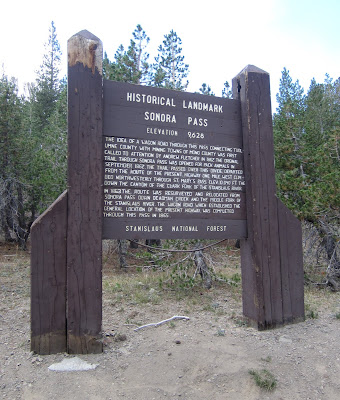 On the back of the old Sonora Pass sign ... 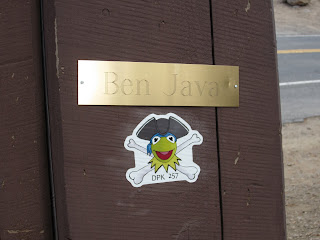 Ben Java, I would like you to meet Dread Pirate Kermit (Ken Morton). You two may or may not have ridden together previously, but I'm sure you will enjoy each others company now!

The east side of the pass was clear of traffic and quite fun. One of my favorite roads anywhere. On to US-395 South and I stopped in Lee Vining for gasoline.  OUCH, the Chevron station wanted $5.45/gallon of regular! South a little further and then east again on CA-120 to Benton Hot Springs. This is a fun, FAST road also. Shame there was too much side wind for some Zero-G maneuvers over the giant hills! ;-)

The weather forecast for Nevada & parts east was not looking very good. The second of 2 hurricanes was slowing down and waiting for me to catch it. As I looked east into Nevada, this is what I saw.

The lights dimmed many times that night, but never lost power. 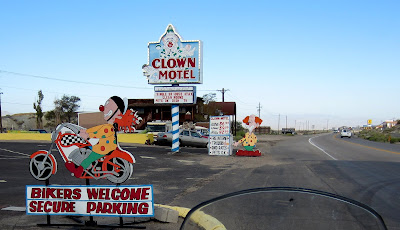 Stayed at the old Clown Motel. WOW, look at the new signs & the clear sky the next morning!

September 21, 2012, I needed to be in Altus, Oklahoma for Mom's 80th Birthday. This was the main reason for the trip, but I also wanted to visit more friends & places. A similar trip in 2006 was 4 weeks in length, and not nearly long enough to see everyone & everywhere I wanted to.

Then I got word of my 40th High School Class Reunion in Brookhaven, Mississippi, 2 weeks after Mom's birthday.  Hmmm ... I can make this happen!

Then I thought, 2 weeks is a long time. I'm planning to stay with Mom for a week, but that gives me a week to get to Brookhaven. Hmmm ... I could visit relatives in Illinois in between.  Then I started mapping out routes and locations of friends & family to visit.

While we (my brother, sister, & I) planned a surprise party for Mom, I had a nearly 3-week, +4000 mile ride in August with friends to Oregon, Washington, & Idaho.

Ms. Caponord needed some maintenance before the Fall trip, so I ordered parts. I also ordered and staged a new rear tire at a friend's place in Texas. I was coaching most weekends earlier in the year to help pay for the trip.  It was all slowly coming together.

Packing for a 6-7 week trip can be challenging. Especially if you are bring all of your camping gear to help keep trip costs down, and carrying a computer!  Hopefully the weather will cooperate <cue sinister soundtrack>.

All the work was done. On the final test ride, my new right rear turn signal which worked fine for 2 days, was dead. It tested fine with +12v applied to the correct wire to the signal. No time to tear the fairing & electrical apart. I would use hand signals for right-hand turns for the whole trip. It just would not be right to start a long ride with your Italian Mistress(tm) and there not be some electrical drama!  Glad it was minor.  :-)

Posted by Catfish at 2:21 PM No comments:

My friend Chris & I had been watching the weather forecasts and it was obvious that we HAD to go dirt riding on Tuesday (Jan.1st) or Wednesday. The big-ass storms were due in on Thursday.

We selected Hollister Hills as our destination
<http://www.parks.ca.gov/default.asp?page_id=404>.
Chris & Artyom had been down there recently for their 1st time. I hadn't ridden there in ~17 years, so I didn't remember the place to speak of.

We arrived about 10AM Wednesday and staged in the Lower Day Use area next to the Vintage Track & the entrance. We warmed up on the east hill section in the upper right side of the map. These hills are covered with sparse Oak trees, occasional bushes, and dead grass. This area has a unique adobe soil that packs down under heavy use on the established trails.

These trails *looked* like they were paved. Blue grooved from edge to edge. The surface was hard & smooth. Berms around the outside of every curve and frequent water bars to jump off. Studder bumps at the entrance of down-hill curves and whoops at the exits. All hard, smooth, & black. Weird. This surface apparently becomes like ICE when its wet and they close this area. Most trails are one-way and just wide enough for ATVs.

Every marked trail is criss-crossed by many unmarked trails. These are not packed; more loose dirt & some moisture in the shaded areas. Fun play area, but it wasn't technically challenging. Unless you tried the killer hillclimbs. Most of these blue-intermediate trails would be marked green-easy at Carnegie or Stonyford. We then rode into the western section (left side of map) that climbs the ridges to the top of short granite mountains. These trails, or roads as they are labeled, are mostly one-way also, but very wide. Wide enough for an ATV to pass another ATV in most places. These well-traveled roads were really whooped out at the corner exits, so you had to run the berms FAST to be quick enough in the whoops to stay on top. Or, slow way down to weave & dodge 'em. The dirt is a gritty granite sand with some fine dust when dry. At the higher elevations, the Manzanita were thick and 4-6 feet tall; a rare tree here & there. In the bottom of the canyons, there was more trees & bushes.

The views were pretty good, but we were getting bored with the dusty, easy "roads". We tried a couple black-diamond trails, and these weren't motorcycle single track either. These were jeep-width trails, and I'd only rate as blue-intermediate on the Carnegie/Stonyford rating scale. These trails were a little steeper & tighter, but not very challenging either. There were very few unmarked trails in the Manzanita zones. Obviously WAY too much work to cut through that stuff.

While eating some lunch near Tule Lake, we noticed that the double-black-diamond trails were the only ones noted as single track on the map. The closest one to us was the upper entrance to Troll Trail. We took Badger Trail to Long Ridge Rd, and Olive Orchard down the ridge. At the T into Lake Rd., we turned left and climbed the ridge back up to North Canyon Rd, and the start of Troll Trail
Posted by Catfish at 7:56 PM No comments: